Back to the future

Odd one yesterday. Got the chance to dress and really went for it. started with a post on Facebook regarding using Kryolan stick as a foundation.  When started off my first makeovers ere done using kryolan so bought a colour corect stick.Later bought a slightly lighter stick as another website had a triangle in the centre of the face which actually turned out to be surprisingly effective. The problem with kryolan is is a swine to take off and at that time that was a significant issue, still is I suppose.  Anyway looking at the older pics and the face looked better. Suspected the kryolan was implicated in this. Ddecided to give itanother go. Finding the sticks was easy but the setting powder had vanished so used Aldi normal powder. Pleasantly surprised by the result so tried some pics.  Again in a retro way just put the flash on the bannister. Well later looked at the results and there was a something so felt it was worth doing at least for pics. For going out, well possibly used not enough powder but the creases seemed to somehow be more obvious after a time.  Will try to hunt out some powder to fix the kryolan and try again.
So all in all it was a success.  The makeup went on easily, basically took it easy and lowered my expectations. Need to start thinking about Brighton 2015. A poster appeared on Facebook including a dance at the saturday evening. Very tempting  but where staying is a 15 min train journey and say 10 min walk. Will think about it but would like to do it. There is something wonderful about going out in a nice frock in daylight. If could change into my fineary it might be possible. Need to order some more contact lenses, coming close to running out. Still not bought a new camera, again suspect there is a subsconscious reason for that. Did start to explore monopods for the outdoor pics. Do need to crack on with the diet and the exercise to look my best at Ditchling Beacon. Currently at 11 st 8 lb but have dipped down to 11 st 7. Still too much love handles on view. Only need to lose say 4 lb's. 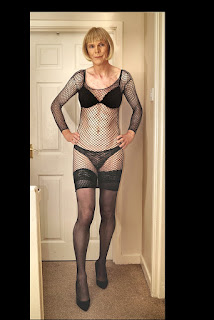 Posted by SapphireSomeday at 13:32 No comments:

Is it worth it?

Attempted to get the mag where there is suppossed to be my pics. Left with a some food for thought. It was a battle getting there.  Suppsed to be 35 minsby train but train was late and had to stand to Newcastle. Then took about half an hour to find the place.  The mag was not there but could get 4 items for 3. Nothing in the "toys" or vids but saw red and black mules  at £22.  promising.  Lace dress at £19. Then a black lacy kimono at £45, opps.  The woman suggested a basque at  £39. The final bill was £107 which felt high but was correct. as ever I had got slightly "fuged" by the place. So was it a result, well up to a point.  The shoes well would have paid up to £30.  But the rest, well, nothing was at a stupid price but you could easily knock £10 off each one. £70 wasted would be harsh but £70 for the lot would have been a bargain.
There is a bigger question as to buying things for the lass, how often will thy be used and how do you measure value for money? So I have an Axford corset at £110 which absolutely love and another for t £100 which was not quite an impulse buy and ideally I would not have bought.  The latex stockings, good fun but used so few times are they a result?  They have fed the inner girl and I can say I have worn latex, so the cost is probably OK.  Potentially £60 of todays spend could be done without.
I have an image of being in the summer accommodation, kimono, mules and in the front room having breakfast, probably too close to the window. Thats worth a few pounds. One of the aims of the blog is to reflect and to modify for the better my thoughts and behaviour. Would like to go to What katie Wore in london but that will be expensive!
Posted by SapphireSomeday at 13:26 No comments: