From 2000 to 2007 the Brighton holiday was quite fun, the original first years very much so, it has to be said that by 2005 it was because to an extent of its cheapness. There would be a few days with Mr G, a walk with Mr G and a few walks by myself. It hung together but there was  a creeping sense that it was no longer enough. Then in 2007 we had a paradigm shift, it could have happened at least a year earlier possibly 2. It is difficult to over estimate the enjoyment I got dressing in my room, putting on makeup and having a meal and getting quietly drunk, listening to music. It was as good as I was going to get, a trip to Lacies or possibly Doreens for new clothes, A trip up to London for a dressing appointment, glorious.  The time in the old Boudoir with the white bricked walls, the arched window, listening to the radio for the time. Four hours of something would not get elsewhere. Granted I wanted to explore other aspects of dressing and perhaps   ImageWorks would have been better earlier but lets not spoil things. Transister was the big moonshot in 2009 with the wonderful Clare Project visit. In 2011 walked home from Clare Project dressed, though had been out dressed before a couple of times but briefly.  also there was a MAC makeover and the meeting with Rebecca. November 2011 there was going out dressed in daylight from Legends.By 2012 there wasall day dressing for several days without issue. these dates have ben taken from a docuement labelled Paige's Progress and crossreferenced with Flickr so its probably canonical.
This has ignored the 2 visits to the Brighton dressing service by the church, quick in and outs, Tranny parties,  time at Legends and meeting Stella and thats just of the top of my head.  the overiding sense is of having moved on and that i can dress and go out in a lot ofplaces now, I no longer require the liberality of Brighton. So I will be down on a sunday, foind somewhere to stash big pack, monday, tuesday wednesday in Brighton, thursday walk and friday last day.  Up on saturday. Also 2 days in London; friday and saturday. Need to plan what to do., which is a nice place to be really.
Posted by SapphireSomeday at 06:34 No comments:

Went outdoors today, as far as the bottom of chester road and back. passed a fish and chip shop, really wanted a bag of chips but was disciplined. Not easy though! How many times do you have to do that to get to a target weight and stay there? How many treats or small delights forgone? Well as I am not very active at the moment it all helps but in general to get the weight off its a lot of work. I have lost at least 9 lbs possibly more, its easy fat which would probably have gone anyway as the metabolism kicked in again but even so. Also been doing some pilates every day, prefer to believe you can see the difference. Again that requires some discipline as well but its worth it.
Mind you not got very far with the voice. There was a hope could pull out a female voice but no lnger ertain unless I went full time it could happen.
Posted by SapphireSomeday at 08:25 No comments:

Nearly At The Holiday

Several days ago I spent £85 at the Sweaty Betty website.  I had been watcching the sale for a couple of weeks and for whatever reason I pounced. There was a lot of hmming and harring about size, I have a pair of large leggings and they are slightly too large so went for medium. The zero gravity running leggings are compression and that meant when I tried them onthe were very compressive. However hopefully a wash  and time will resolve that. To be honest its £85 which ould go on something else, almost 2 hours at the Boudoir, for example. Not entirely sure why
#i cracked, its a strange one. To an extent its dressing by proxy and also its a different lifestyle which the girl should have, a Fat Face, SweatyBetty white wine at Brown's she deserves. There will be 2 days at London and 4 days at Brighton, assuming I do the walk which I probably will. So finally do the Dome the ghost walk, Lewes, coffee houses, the museum, the Lanes. All of a sudden slightly pushed to fill the time. Possible MAC makeover, err, possibly.This assumes no walk with Mr G which is a possibility. Like to try Browns, oysters. In a sense it is still enough just to be the girl. Not been a good year for her so far all things considered.
The big thing is the 10 years anniversary. Need to think about doing something for that. No longer get the thrill I got going to Doreen's or Lacies. Moved on I suppose. The foot should be up to it but no running I suspect. did Doreens twice, it worked at the time but we move on. No moonshot this time, London has been done, Liverpool has been done.
The weight is under 12 stone, which is good. Been doing the pilates and its helping definately.
Posted by SapphireSomeday at 11:48 No comments:

Lets have a bit of good news.  On 2 conseuetive days my weight has been 11 st 12 lb. Result not quite sure how that happened as not been moving much in the last couple of days but lets be positive.  Since middle of May when i was 12 st  lb I have lost 11 lb in old money. Been tottering about the 12 st mark for some time so glad to go through it. Granted the weight was artifically high with the underactive thyroid but even so I feel thinner and the muscles more obvious.
The love handles are still there but they are smaller when i muffin top shall we say. The aim is to get to well as low as possible, that probably means 11 st less than 7 lb.  Thats another 5 lb at the least. lif you accept that i have more muscle now it may not so much after all for me to look better.The cheekbones are reapppearing and the chin slightly less Mr Punch.
Once the foot says yes will have to do exercise for real to get the abs sorted.  It may be too late as there is only just over 3 weeks for that to happen.
Looked at wigs on the Internet, really want an auburn one, probably a bob. Really need to give the new one a fair run but something cheap and cheerful would be nice
Posted by SapphireSomeday at 07:41 No comments:

Back On The Horse

Bought a new pair of scales today, an anachronism as its only one and flat but lets move on. It said 12 st 1 lb then 12 st 1 1/4. The bmi is 21 and the % body fat 17.
This probably means that I have lost say 6 or even 7 lbs, half a stone, certainly the trousers fit better. This can only be good news and the original plan of being under 12 stone should be easily achievable. Hope to start back running tomorrow so that will help. Got just over a month to get the body ready for the holidays, hoping for some nice pics on the SDW and even the beach. The hotel is next to the beach so it is possible as is a bit of a run, Saltdean and back ideally, possibly even some pics at the Lido would be fab. Only actually 5 days in Brighton, as ever could have done with more but 2 days in London.  The ultimate plan is to get down to at least 11 st 7 lb if not less, then there will have to be some solid exercise too.
The gurl has had a good week as J and K have been away on holiday.  The bad weather for a few days put me off slightly but even so 3 camming sessions, 3 photo sessions and it was relaxed and laid back rather than the grabbed and panicy time Iusualy get. Even managed to set up a studio in the garage, this time carpet on the floor prevented the sound of the stillettoes on the concrete floor. It has to be said it did relax me and even now feel the benefit.  This is a double edged sword; does it mean the gurl really does need to be let out more often for my better well being? Did not feel the need to dress every night but certainly do more often than have been doing. The new lighting system needs a bit more work, if I could disable the bleep of the flash units would go for them. The pics were not ideal shall we say, but to what extent that is down to the camera now feels more likely.
Used the Kryolan stick which is better for pics but not real life as its thicker. Prefer the redder lipsticks must say, also the red hair wig. The body and legs do not look too bad at all. Bought a summer maxi dress from Kidl, I know, I know, size medium 14-16, do not feel small would really work at the moment! Need to sort out a pair of sandals and the toenails but it does feel doable again. 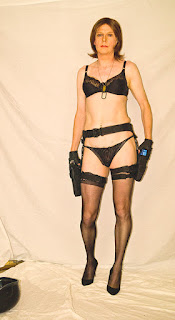 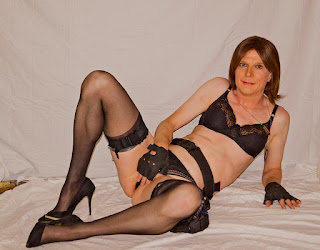 Posted by SapphireSomeday at 12:49 No comments: