It is 5 weeks since Brighton 2012, get the teeshirt. Coming back on the train I was worried there would be issues readjusting. Perhaps as well hoping this would be a sign that Sapphire was genuine so there would be issues.  Well first couple of weeks went well then things got a bit worse.  Its not crawling up the walls but she is in m dreams more and there are "acid flash backs."  Possibly if the support group had been on that would help but even so there is now an issue that I have shown I can do it and have done it and want to do it again.  Hormones have raised their head again.  Not a good sign. As ever what do I want?  The answer is currently to be Sapphire not on holiday, notice what I did there?, would require a massive change in circumstances.  However, how much do I want to be Sapphire bearing in mind soon I will be much less attractive.  As it is, I am not a young girl but "middle aged" so time is running out.  Hormones would be more risky, SRS more so, even if that was where I wanted to go.  Possible first mention of SRS. Could be something in that.  Transitioning at 60?  Would the NHS go for that, would I?
Posted by SapphireSomeday at 13:23 No comments: 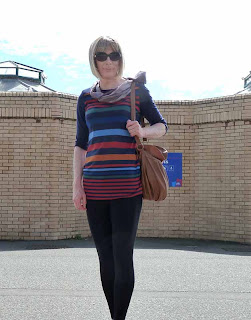 Absolutely love this pic.  Taken by the toilets at Hove seafront. I had just bought this top from Marks and Spencer Brighton, tried it on in a changing room and actually spoken to the woman there. The   sunglasses kept catching the wig and pulling hair out.  However this is as good as it gets, just out walking being female.  OK you rarely see women by themselves but let it pass.  It was sunny and I was ignored I prefer to believe.  I was on holiday but it was all so easy and natural and right.  I was confident and happy and did it for real.  The bag was fab, shoes broken in and sunblock on.  Bangles would have  been nice but thats a small issue.  Paige is 5 years old, I did this briefly last summer and more so on october and this February but really did it this summer.  I used to worry that I would wake up one day and it would appear to be stupid and a phase.  Well 5 years down the line and there we are.  Lets not be negative.  Lets be positive and hopeful and cut some slack.  It all came together and worked far better than I could have hoped for.  I did it and will do it again!

Posted by SapphireSomeday at 13:24 No comments:

Neither here or there 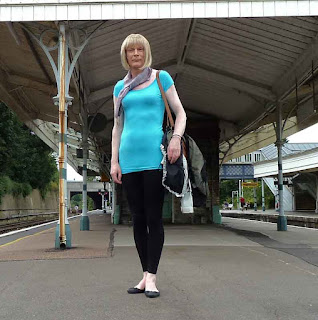 Well it's 2 weeks since Brighton and I am not climbing up the walls. A bit of me is slighty disappointed at that as if I have progressed so far but it's probably good news. There have been some very significant twinges and we are defiantly in a new place. I have had the opportunity to dress but did not BUT its burning in the stomach sometimes. Not really sure what to say. It may go away but it may not. It was really important to go to the support group and I do feel a need to interact socially as Paige as opposed to look glam on Flickr, though that is nice too. Found a potential source of hormones needs some honking about this one. Possibly may be able to get a cheeky few days at the end of October,wondering about Manchester? Then we have Sunderland Pride. May be something there. Tricky stuff, possibly will only know in a months time. Some interesting stuff with pierced but that's for another blog and may well fizzle out.
Posted by SapphireSomeday at 10:42 No comments: