First off, did a photosession yesterday.  It was the real proper experience, light boxes, garage, set up a set the whole enchalida. It startd going silly when the intervalometer played up rather a lot and that became an issue. It was the Madeline Smith/halloween picsso glad to get them done. With a bit of luck should also get a chance to do anothe rmore obviously jokey set later in the month. I suspected the laptop was filling up on the C drive but thought it reasonable to assume that isues would not appear with over 6 Gb of  space still free. Sadly it this I was wrong. The hard drive was whirring away a lot but ignored it until realised the issue.
Ended up dumping a lot of pics onto the external hard drive and freed up quite a lot of space.  Half way through the laptop and the external hard drive stoped talking to each other. It required a reboot and  10 mins for them to reconnect. For a brief period I did worry that I had managed to trash the equivalent of the FAT table on the external hard drive. That set me thinking about how much I actually needed and how much I could lose. Granted thats a silly question as you do not know what will become useful in the future and also you should be able to just dump it all onto the backup. My backup is an external hard drive but only 1 and thats not really good enough as todays brief scare showed. I have 2 old NAS boxes but need to spend real money on HDD to get them really working properly. At the very least I need another external hard drive.
Going back to the question regarding how much will be useful in the future? To be honest very few pics hav ebeen useful so far, there is anaawful lot of redundancy. Be sorry to lose some of the A D pics, the holiday pics too and some of my own work. The JL pics from the first session have sadly disappeared apart from a few important ones, which is depressing. I have an image of a future me looking at these pics for, sadly, i am on a downward spiral. If i were say 30 today i could expect a good 15-20 years before age would start to whither me. Ideally I could grow my own hair long and it would be a lovely auburn. OK too much thinking that way is just depressing but I am managing decline. slowing down the slowing down. Not going to get all Bladerunner "tears in the rain" but each time i look a a new set of pics i do wonder. It goes, of course it does, but there is a sense that one day it will not be enough to be thin and have good legs! There is a gg as they say on Flickr who once was clearly  a beauty and was happy to show it but today still likes the attention but the pics have spent perhaps too long in photoshop. That is not a place i would like to be. Of course we all believe that point is far away. Lets be positive I am still catching up for lost time.
Posted by SapphireSomeday at 10:51 No comments:

Well that was progress

Just looked at the Flickr stream and saw the pic of me sunbathing on Hove shingle. Suppose there are so many things which just happen when on holiday but only now looked at the pic and thought wow. There I am in a one piece swim suit sunbathing on a towel showing a lot of skin just like a proper girl. More than that i had worn a sundress with a scoop back and cut to show alot of leg and walked there and just taken the dress off, in a ladylike way and lay there. showed legs and feet. Plam A was to wear a bikini but let down by the tucking, as it was did not stand up much as the tucking was still not ideal bit even so its a big thing really, granted the wig was a bit off and perhaps the makeup a bit tired and the flats should have been flipflops but all in all an absolute result. got to say did not look too bad, well from a distance.
There was half a plan a aspitation to do the same last year but even with the fun of changing into it underneath in a local pub did not find a suitable area ws comfortable to do it. however did this year. 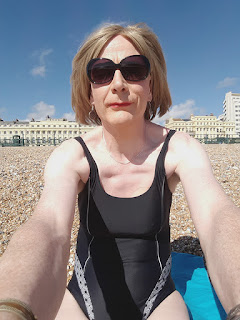 Posted by SapphireSomeday at 14:21 No comments:

Last night managed to put the 6 mm PA piercing in. The white area was looking quite small so decided it was worth a go. Still took say 20 mins and a bit of work but not as much as the 5 mm and there was no blood. So thats been done and its all good, odd twinge but thats to be expected. The aim is to go to 7 mm then see where we are. Put the 5 mm in March so really doing rather well. 6 mm does look like a proper size, happy with it. The issue is above 7 mm the hole requires surgery to heal, or so I have read. On the Internet so must be true.
Slight concern the piercings make tuckingharder. Have not dressed for quite soe time, possibly even 2 months, gulp. There was a possibility of today but that didnot happen, another window of opportuity should hopefully arise soon, ideally duing the half term holidays so I can borrow some props for some pics.                    Laptop being silly so will stop now.


Posted by SapphireSomeday at 14:05 No comments: