Had another brief dressing session today.  No makeup had a nice idea which could work but used compact camera which totally failed to get a decent image.

As ever had a bit ofa battle finding things, putting things back, usual grief.  Started to think its too much work really and need a rethink.  Need to tidy up my clothes, need to sort out the camera, need to sort out the wig.  On the plus side the weight is starting to look better.  Definatly below 11 st 9, even had a 7 on the scales but donot trust the scales too much.  Certainly feel better.  Within a whisper of restarting the hormones.  Do not want to put on weight again which the hormones would probably do so along with the usual dichotomy where do I go, not sure it will happen.  Its odd.  Sapphire burns but when get the chance to dress a little bit reluctant then when I do get feelings in stomach.
At pic 799 on Flickr.  Not sure what to do for pic 800.  Pic above was the cunning plan but would need a better camera.  There is a pic of old me, naked with body hair, when was the last time I had body hair?  That would be an interesting one to use with a bit of cropping.  There is a increasing sense that the clock is ticking on things and do I really want this to be the high water mark.
Went to support group this week.  On the one hand only 3 people there is cosy but its the second week and feel for the supervisor/group leader.  Put the denim skir on showed a bit of leg.  Stopped doing that a long time ago and thought leggings a a miniskirt was a good compromise.  If I have a look can find 60dernier tights which look good with  a skirt.  It may have been lasy Xmas when a rather nice Tgirl turned up for the pizza no doubt.  Full makeup, longskirt, great body language, was  very taken wth her.  She had a partner and never came back but I thought a better class of girl.  Totally stupid of course, the human condition is irregardless of looks but it was something to aspire to.
Posted by SapphireSomeday at 09:33 No comments:

When I think of Brighton 2013 there is a slight sense of disaapointment.  Ignoring reasons for this for a moment an event has bubbled up which is significant.  I am on the green at St Peter'sBrighton eating an Aldi sandwich and fruit pot.  Suspect about to go to the Claire project so M ad S top, wooden beads and flats, as ever.  The point here is it was not part of the "bucket list" as I have read it described, it was just a thing to do.  Hopefully as a normal woman would.  Granted rare to see women by themselves but lets move on.  Thats where I am when in Brighton, nothing to prove just doing all the normal things as a normal woman would.  Sadly the other 51 weeks that isnot an option.  OK there are other holidays and occassional times to dress but its an issue.  On friday waas in office and it burned surprisingly brightly.  Hopefully tomorrow should get time to dress and possibly pics.  Lets be real.  I have been doing this since 2007,really 2007 must check, anyway at least 5 years.  Its stronger, it has not gone away.  I have awheel of estrofem in my draw.  Last year around this time I started on the hormones.  Had to stop but could so easily start.   If the burning gets stronger and too much may have to  go back to it.  lets say I work till mid 60's then transition what sort of life would that be?  Transition at 55, need a new jiob, live else where , lets not go there, how to make that a reality?  Am I really talking about transitioning or can I live with a bit more? 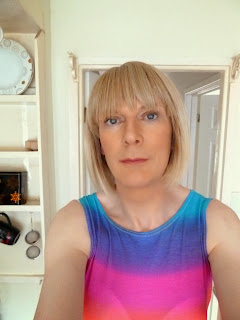 Posted by SapphireSomeday at 14:00 No comments:

One of the more interesting aspects of this Transgender lark is that it surprises you.  So last night I did a little bit of dressing.  The 6 suspender belt, black stockings, black bra, heels.  Well even with no makeup it was a success. Felt better and strangely happy for several hours later.
Gave the corset to Seamstress.  Got nice email back.  Like the thought of it being used by someone properly.  It was bought at Waterloo Honour a shop diffficult to find and surprisingly small.  Had a late breakfast at Barberella's.  Dutch girl did not want to lace the corset too tightly.  Also got he latex body which was a bit ofa flop.  LSE of course.
Was accepted to join a group in Facebook. So far so what?  Well the point is one of the administrators is a person whose opinion I judge important.  Its as if you have been given a seal of approval.  looked at my pics and said "OK let them in." OK more realistic than that but even so.
Did a bit of brief dressing today.  Not seriously, no makeup, contact lenses or pics to speak of. Heard a car drive up and park.  Sounds right I thought and, not in the fevered way that have and will again do, started to take the kit off. Couple of minutes later back to boy mode, went downstairs.  Car in drive people not in yet. Gherkin juice leaked in boot so probably sorting that one out. Opened door was back to me.  The pool was closed as a gala was on.  Whtas the odds?  No stress or anything.  Of course the problem is not enough time to dress or take pics.  Lots of stuff there but ultimatly the problem is not me but everyone else. 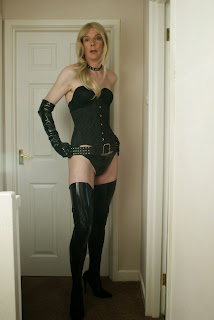 Posted by SapphireSomeday at 06:39 No comments:

Well did get a tattoo. Quite pleased with it.  Have to see how it heals but better than expected.  Not particularly painful either.  £60 all in which is fine really.  Full of endorphins went a bit mad.  PVC corset £25, La Sensa knickers £12 for 3, £27 for play pink wig, long gloves, complete body suit and tiny shorts, there is a photo in that lot.  Finally a £10 6 suspender belt and a cup chicken fillets £7. Woman in stall wanted to vent about a woman buying the wrong size lingerie for her daughter who had no self image which was accurate.
Mind you my self image is a bit off too The weight is probably 11 st 10 lb so lost 1/2 a stone which is good.  certainly feel better and the legs look good.  Ideally get down to say 11 st 4 ib but we shall see.
There is the possibility that could be alone a bit at Xmas which would be lovely.  In the meanwhile would like to do a hallowean pic and a Xmas pic.  Would like to get chance to take some pics!
A kind person on Flickr reworked one of my pics.  Mainly my face which I take as a complement.
Still need to get retro suspender belt perhaps that can wait.
Sapphire is being very demanding not sure why but have not had a good 100% session for some time.Not sure, apart from booking a hotel room what can do about that. 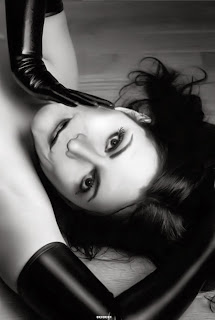 Posted by SapphireSomeday at 13:38 No comments:

Fly away fly away home

Mentioned in last post the idea of a "moonshot" a big thing to try.  Transister was that, as was going to a dressing service dressed.  There is also inherent in it the idea of a lot of planning being needed as well as a final act requiring bravery.  Possibly the last 2 holidays were moonshots too. In a way the hormones were also a moonshot but a day to day bravery rather than a final single act.  It is probable I may well go back to the hormones but I have no final aim, things are complicated.  How could I live a life with breasts, how could I plan for that what could I change to bring it into  a possibility?  There you have it, again and again the brick wall keeps appearing.
Getting a tattoo on saturday.  it is a ladybird and on left shoulder blade.  it could be girly but also as I collect ladybird books.  Once you accept the idea of modifing your body tattoos and piercings seem tame compared to hormones.  There is no Ladybird book of Tgirls, no Observers guide to Transitioing or even a Project book to being Trans.  You have to do your best. 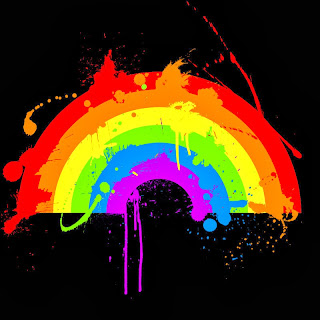 Posted by SapphireSomeday at 10:49 No comments:

Just had a bit of a thought.  To date Sapphire has done all the big things alone.  From buying clothes, the first time past the door, clubs, MAC its been all me.  Nobody to hold my hand, literally or figuratively.  Perhaps thats why the Internet is so popular.  A chance for fellowship,  perhaps even some form of friendship.  Flickr other less family friendly sites all offer the chance for "pretty," "lovely, "prettiest girl on the web" hit and run comments to keep us going.
Its all a bit negative but probably true.  We all need validation, support to keep going.  The drive is not infinite but the siren comments of the Internet need to be listened to carefully.  Getting your genitals out is easy and gets good comments but does not really help in Marks and Spencers. It depends where you think you are going.  To the bed room or to the great outdoors.  Choose your pics with care and be very careful over what you believe.
Its a bit negative, the support group has not really been a massive help.  Granted the counselling was very useful and the chance to dress is good but thats where we are.  Not sure what expected from the suport group, more probably but, well, not sure what it is doing now. Will be returning to this one but putting Sapphire in TRansister and then Kings and Queens Brighton was my moonshot. Been there, done that.  The expectation was be on Mars by now.
Posted by SapphireSomeday at 13:59 No comments: