OK lets take a load of pics, dressed, say 200plus, out of that number ignoring duplicates, technically unacceptable pics and ones with clothes or wig out of place there are  a worrying few. These pics taken wehn dashing in heels to pose or when counted number of shots wrong can show a not very flattering image which is unmistakably masculine. So side on my ribcage is too large or my chin ios too big or hands too large, well these pics will never make it to Photoshop.
Last summer tried twice to run dressed, the first time was dreadful, wig lets not go there, makeup a mess, sports top didnot contain the breast forms. Thesecond time learnt from these mistakes. Then when on SDW a woman looking for her mobile phone saw me in the distance and said I was a man. The ultimate point is even if I got a voice spot on, smaller hands and lost 8 inchs off my height I would still not pass. Not that ultimately that matters. This line of thought was started by seeing a gurl who I admire and who has done more than most to be feminine in a picture doing a run it was not close up and the big shoulders showed, it was a it depressing  but we do our best. We do not pass but we try our best.

Posted by SapphireSomeday at 11:08 No comments:

Managed some pics today, not sure how long I would have and that took the shine off it. All in all it was a very stressful event and the pics initially looked OK. Bit of lens flare but OK. Sadly after converting them to .DNG and more examination they were a mix of out of focus and over exposed. Will be able to salvage some but yet again creeping disappointment again. The lens flare not sure why that happens  it just seemed to appear several years ago. The focus issue comes and goes. The main problem is I need time to resolve these issues and get the new flash up and running consistantly. The second issue is the closeness and the area of the space where I can take pics. If I know I have time then can put up the parachute material and bounce flash. I could get a proper frame and background for about £30 to £40 and if was alone or had a whole week would try it. Having said all that the pics can be technically quite good sometimes just not enough.
The eyes look old and the mouth creases too, its all so very frustrating. Suppose in a way do feel better but yes well know where that one goes.
The new red Katmandu corset worked well and 26 inch was pretty well spot on, take that grumpy grey haired woman shop assistant. Was it worth £40, well possibly but do need to try the other corset too.

Posted by SapphireSomeday at 15:02 No comments:

Well the pic fest did not happen, again, again. Before I went to Manchester on the saturday hjitKatmandu, been told they were closing down. Scored 2 half price corsets, £40. One is a proper corset and the other wil be fine for pics, ideally would have gone a size up but will do for picsand possibly giving the piercer one. Some bizarre idea of a burlesque act which the pseudo corset will do fine for.  Also got an active wear top and leggings which need trying on properly. To complete this got a £27 MAC foundation brush. Not totally sure why. Also have 2 American Apparel leotards on the way from Ebay, £20. Then again there is a MTP tank boiler suit which may be useful for pics.
There is a sense that not getting the time to dress and when do do not.  Lets blame the thyroid.  If it does get nuked half wondering about a few days away, if can afford it. 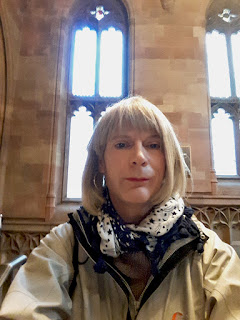 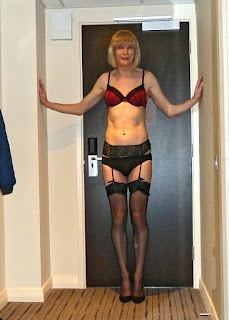 Posted by SapphireSomeday at 11:26 No comments: